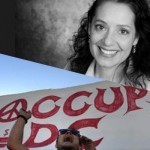 OWS supporter Lisa Simeone says she was dismissed after right-wing attacks…   “I said, ‘Can you explain how?’” Simeone went on. “Scott Simon writes Op-Eds. Cokie Roberts [is paid] tens of thousand of dollars in fees talking to business groups. Moira Ellison goes on Fox TV to express her opinions. They all report on the issues — which I don’t do. I finally said, ‘Are you firing me?’ She said yes.”
Show original