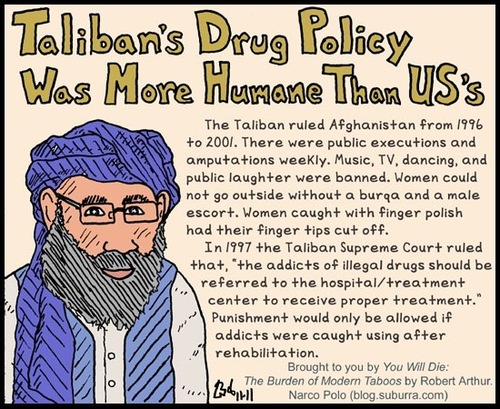 The Taliban ruled Afghanistan from 1996 to 2001. Under its brutal rule there were public executions and amputations weekly. Music, television, dancing, and public laughter were banned.* (2, 3) Women could not go out in public unless they were completely covered with a burqa and escorted by a male relative. Women caught with finger polish had their finger tips cut off.
In 1997 the Taliban Supreme Court ruled that, “the addicts of illegal drugs should be referred to the hospital/treatment center to receive proper treatment. If an addict after receiving treatment and being rehabilitated restarts using drugs, in this case he will be entitled for receiving punishment [sic].”
Via boingboing.net