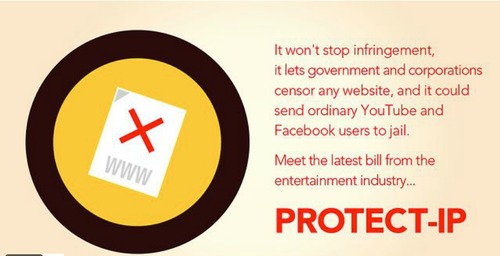 The MPAA, RIAA, Hollywood knows that they have been flying in CEOs of as many companies as possible, recruiting people to get petition signups at malls in California, and here’s the big point– they know they have gotten their message through to Congress — the worst bill in Internet history, the one where government and their corporations get unbelievable power to take down sites, threaten payment processors into stopping payment to sites on a blacklist, and throw people in jail for posting ordinary content is about to pass before the end of this year.   The only thing that is going to stop Hollywood from owning the Internet and everything we do, is if there is a big surprise Internet backlash starting right now.
Via boingboing.net