Yes, it is Wall Street’s fault 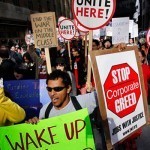 Bloomberg joins Republicans in claiming Congress “forced” banks to give bad loans.   “Bank A (let’s say it’s Goldman, Sachs) lends criminal enterprise B (let’s say it’s Countrywide) a billion dollars. Countrywide then … creates a billion dollars of shoddy home loans, committing any and all kinds of fraud along the way in an effort to produce as many loans as quickly as possible, very often putting people who shouldn’t have gotten homes into homes, faking their income levels, their credit scores, etc.   “Goldman then buys back those loans from Countrywide, places them in an offshore trust, and chops them up into securities … They then go out on the open market and sell those securities to various big customers — pension funds, foreign trade unions, hedge funds, and so on.”
Via www.salon.com